HEAR ME HERE For AMPL!FY at the Museum of Arts and Design

This evening, I’m part of a panel discussion for Adobe at the Museum of Arts and Design in New York City. I’m presenting my poster HEAR ME HERE alongside some of the artists and designers who also participated in AMPL!FY. AMPL!FY was created and produced by Janeil Engelstad / Make Art … 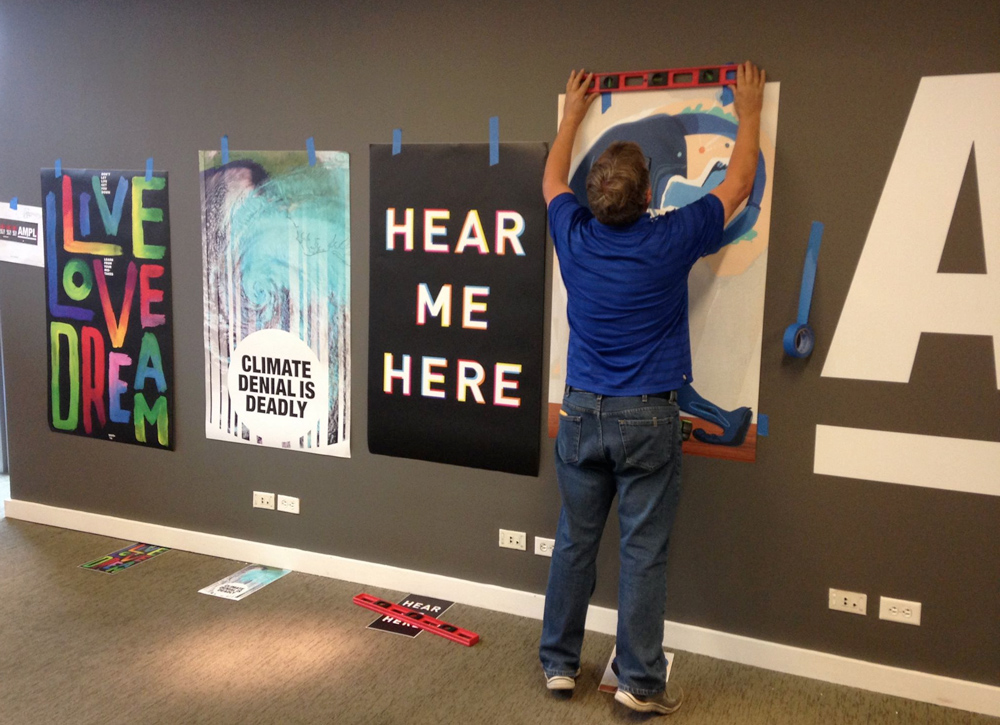 This evening, I’m part of a panel discussion for Adobe at the Museum of Arts and Design in New York City. I’m presenting my poster HEAR ME HERE alongside some of the artists and designers who also participated in AMPL!FY. AMPL!FY was created and produced by Janeil Engelstad / Make Art with Purpose and Mark Randall / WorldStudio

Having clients in theatre for over a decade, I know firsthand the lasting impact theatre can have in shaping a better society. Opening Act’s theater programs provide students attending New York City’s most under-served public schools the opportunity to gain confidence, pride, and the knowledge that they can succeed at anything in life.

Once I had my partner organization, the next step would be to identify a relevant theme for Opening Act. The ultimate goal was to create a thought-provoking poster that will support and publicize the work of Opening Act. AMPL!FY will spotlight their work in high-traffic neighborhoods, helping to promote its path-breaking mission in a time of heightened political and social tension.

In order to create something meaningful, I had to immerse myself in their work and their mission. I met with Executive Director, Suzy Myers Jackson, who invited me to their students Summer Conservatory Showcase. I was blown away by the talent and warmth of the participating students; They acted, danced, sang, composed original music and lyrics and even performed a Shakespeare play! I left the place energized!

I asked myself, what is the core that makes Opening Act most valuable. The answer was empowerment. Something that was validated by my research; in their publication “Theatre and Empowerment: Community Drama on the World Stage,” editors Richard Boon and Jane Plastow wrote,

Empowerment is to do not with the amelioration of oppression and poverty per se, but with the liberation of the human mind and spirit, and with the transformation of participants into conscious beings aware of and claiming voices and choices in how their lives will be lived.

Opening Act empowers students in claiming their voices. Something that was echoed by the students I interviewed. They mentioned how frustrated they are because their stories are being told by others. They don’t feel they are being heard. They want to tell their own stories in their own voices.

That was the genesis of my poster. I wanted to somehow create a poster that will clearly and loudly say what they want to say “hear me, I am here.” That’s when the play on words came up: HEAR ME HERE.

The next step was to visualize these three powerful words. We explored color, form, texture, typography, and photographic styles. For the first round of concepts, I asked myself: Can absence and presence coexist simultaneously? Can one be present yet not be seen? I thought of photographing a model with his eyes closed, then cover the face with white paint, then use a brush to draw a child-like set of open eyes on top of the closed eyes. When I created a mock-up, even though the image was impactful it was a bit too shocking and ambiguous enough to be misinterpreted. I went back to the drawing board.

For the second round I presented three ideas to the client: 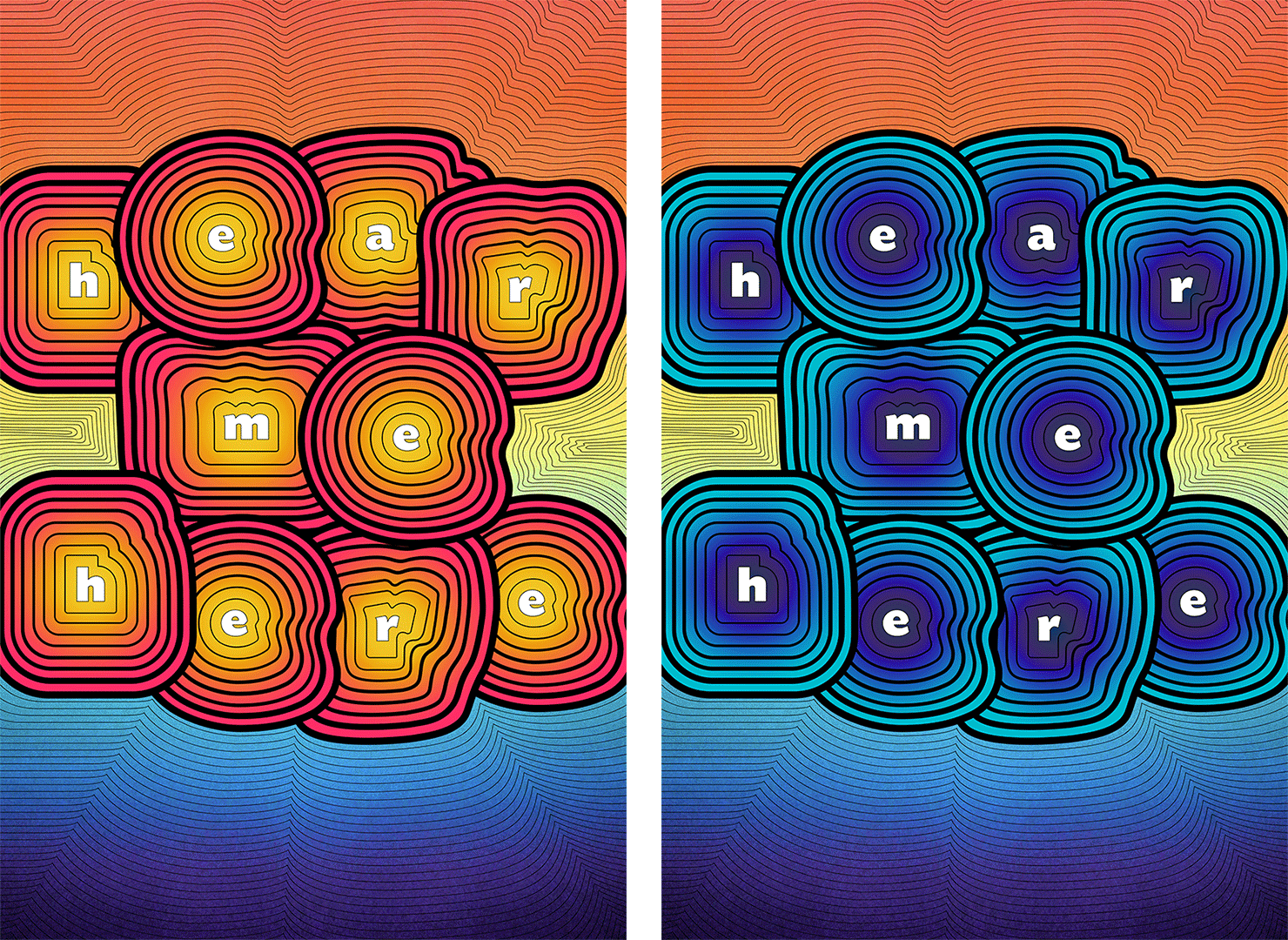 This poster celebrates each individual’s voice within the community. Their voices are amplified with vibrant colors and organic shapes resonating throughout each letter of the statement, “Here Me Here.” The continuous shapes radiate from each letter, which represents the importance of individual’s stories and the impact they have on others. Through this design, we would like people to recognize how influential each person can be and, like the ripple effect, a person’s story has the power to make a positive impact. The color palette is vibrant and uplifting. 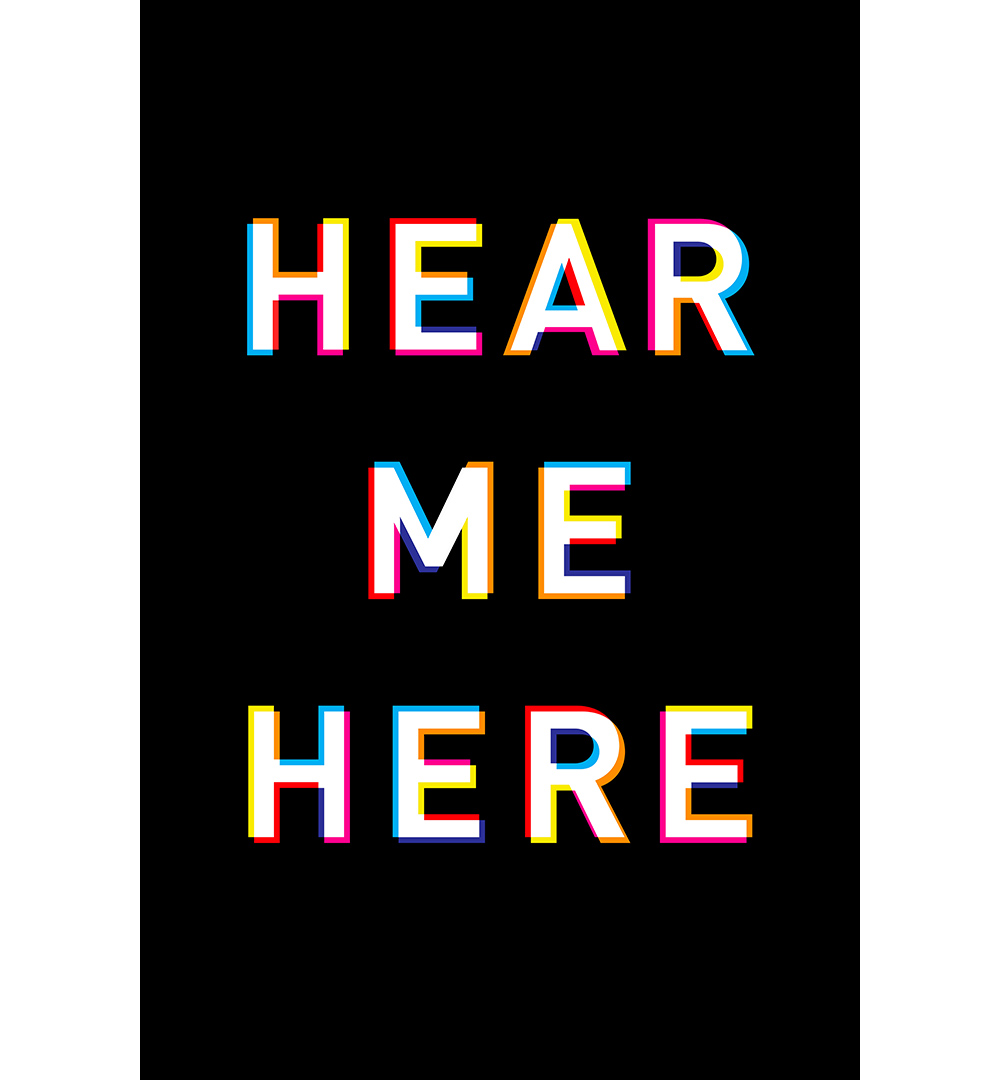 In this poster, “Here Me Here” captures the richness of a person’s story. Surrounding the message is darkness, and the colors from the individual letterforms illuminate the void with its vivid colors. This poster emphasizes how individual’s stories bring light to the adversities that may affect the community and change it for the better. 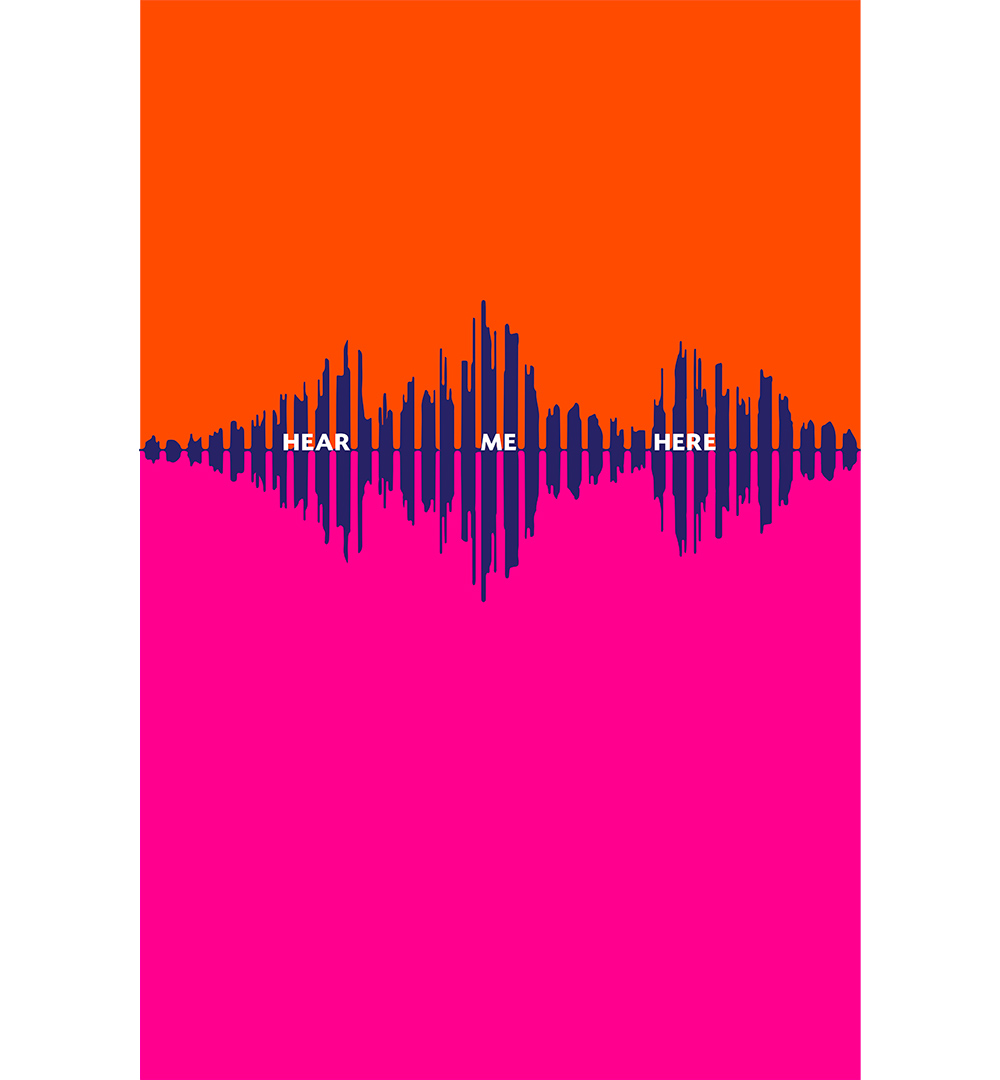 The bars in the background are an actual visual representation of the amplitude of sounds captured when saying, “Hear Me Here.” We recorded our voices speaking that powerful statement. The two-dimensionality of the poster represents the three-dimensionality of a single individual’s voice.

At the end, the client selected ‘Expressive Typography,” and the poster is now part of the exhibition, Ampl!fy! Leveraging the power of art and design to advance the front lines of social justice
Museum of Arts and Design
2 Columbus Circle,
New York, NY 10019
November 2, 2017 – January 7, 2018

It’s been a terrific experience to be part of this inspiring project. Not only it earned me the bragging rights to say that my work has been shown next to fantastic designers such as Gail Anderson & Joe Newton, Seymour Chwast, Bobby Martin & Jennifer Kinon of OCD, and Edel Rodriguez, but most importantly, the satisfaction of contributing to the mission of organizations like Opening Act.

These organizations often play a key role in protecting people’s inherent dignity, helping the underserved to achieve their full potential and practice uninhibited expression of their rights. The work of these organizations is circuitous, challenging and frequently lacks visibility. Typically, these organizations do not have the financial capacity to communicate their work beyond their core supporters.

AMPL!FY was founded by artist Janeil Engelstad / MAP and designer Mark Randall / Worldstudio to leverage the power of art and design to amplify the issues addressed by non-profit organizations with missions that support the evolution of humanity as a whole. 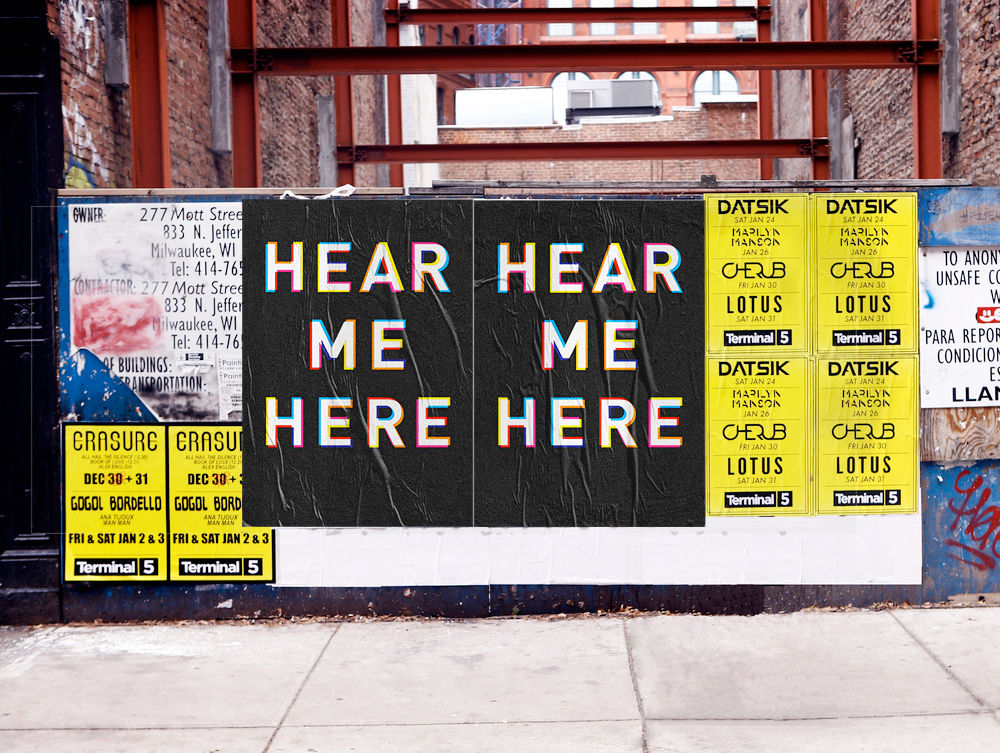 AMPL!FY was created and produced by Janeil Engelstad / Make Art with Purpose and Mark Randall / WorldStudio 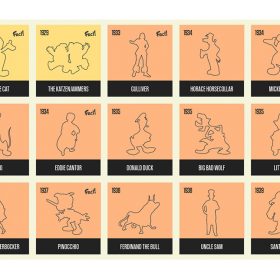 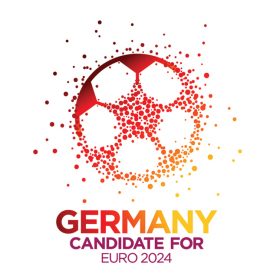 Germanys Bid For UEFA EURO 2024 and Their Logo Competition 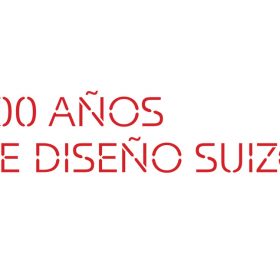 The 100 Years of Swiss Design in Mexico City is Awesome!