Image © 2018 Celeste Hylton-James Listening to music isn’t the same anymore. While many of us can remember roaming through the local music store, there is a growing number of us that haven’t had this experience. These days, many listeners can be found streaming music on popular digital platforms like …

Listening to music isn’t the same anymore. While many of us can remember roaming through the local music store, there is a growing number of us that haven’t had this experience. These days, many listeners can be found streaming music on popular digital platforms like the fortuitous Spotify and Apple Music. Before an album was found in a subscription, you can see the album’s body and the design that carried its treasures. Art is now optimized and designed with a specific understanding that chances it will be viewed as small of someone’s thumb is highly likely. Minimalism is the common approach to this limitation but isn’t the only solution. Designers and artists are becoming more purposeful with their approach keeping in mind with the musician’s overall brand in the digital era. The digital age is challenging designers to connect in symbolic ways and create an emotional impact with masterful uses of visual elements. Eye See Music is my exploration of this change, and how the relationship between music and art have transformed.

The fever of summer music has dissipated, festivals are rounding up, but there are quite a few beautiful tracks that are heating up my earbuds. The 7 tracks I have gathered are diverse and the artwork that accompanies them acts as one piece. Unfortunately, I was unable to find the artist of one. If you are able to identify the artist, please send us a message.

Action Bronson is trying to live his best life. He freed himself from contracts, dropped original bars, filled canvases, and now has released his most independent collection of work to date, White Bronco. The mixtape’s expressive cover is made by no other than Action himself, sharing the work with fans late September on Instagram. Faintly inspired by Picasso’s work [acknowledged in the track “Picasso’s Ear”], these blue snakes spiral around what looks like a skull lying in blood. I’m not sure if the title is supposed to relate to a wild horse [referred in “Brutal”], O.J’s runaway car, or the art itself, but regardless you’re eyes and ears won’t be disappointed.

You’ve probably heard this track, whether you wanted to or not. Trap music is here stay, and Puerto-Rican Artist Bad Bunny and superstar Drake have used trap’s infectious beat to reign the charts. With a nice easy “dembow” in the song’s background, MIA’s cover evokes the mood of underground Latin music: robust, rhythmic, and colorful. As the colors of the sans-serif type burst from the background like neon lights, it’s secondary information nicely frames MIA. The colors that fill the type’s outline suggests a mysterious club vibe and creates movement throughout the title.

Chicago-based Artist and Musician Damon Locks is all about representation and bringing light to the social injustices of our neighborhoods. Visually, Lock’s recent exhibit “A World is a Different Place” visually complements Drummer Makaya McCraven’s raw and jazzy exploration. The overall packaging of the sleeve is thoughtful with the McCraven’s underlying message: We are all created equal.

The soundtrack for the newly released horror film of the same name is moody, yet its cover is bold and electric. A pair of Matisse-like hands caresses the foreground and frame. My favorite part of this cover is its expressive type and the synchronized movement of each weight.

Maybe I am biased, but there is something about a harmonious gradient that makes me swoon. I mean look at this illustration by Jonathan Andez. Just as Action Bronson channeled his inner Picasso, Andez’s enigmatic illustration resembles some of Henri Rousseau’s masterpieces based on nature. While the compositional elements between the illustration and type successfully carry a Southwestern vibe, the type beneath feels crammed, needing more space.

London-based Nao’s synth-pop angst is the ultimate closure to a woman’s 20s, the return of Saturn. Based on the belief of planets predicting our fates, Nao dives into the bareness of transformation. Photographer Ronan McKenzie’s earthy and natural tones nicely contrast Byran Rivera’s bold usage of the wide vertical type in her name. Aligned with the balloons and “a” suggests reaching a higher ground. 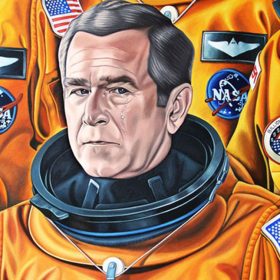 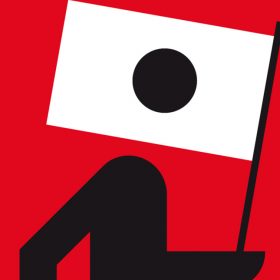 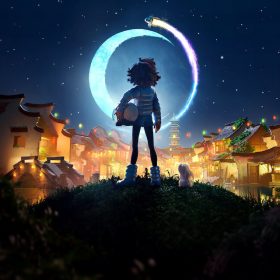 Head Over Heels for Over the Moon!