January 23, 2016. For the issue one week after inauguration, Barry Blitt was inspired by a toddler who somehow manages to start the family car and drive the vehicle across town. I normally agree with the English idiom “don’t judge a book by its cover” but when it comes to …

I normally agree with the English idiom “don’t judge a book by its cover” but when it comes to magazine covers, I cannot help but judge its contents. One magazine that, for more than 90 years, has accurately captured both the news and culture is the New Yorker.

Apparently, New Yorker covers are pitched, not assigned. So artists submit ideas based on their instincts in response to current events. Therefore looking at the last couple of years, it’s not surprising to see Donald Trump on its cover.

Today’s post presents the work of some of the talented artists behind those clever covers: Barry Blitt, David Plunkert, Carter Goodrich, Anthony Russo, and John Cuneo.

I know we are inundated with Trumpish imagery and the last thing we need is more of it. However, I think it’s important to see them as a collection as they capture our turbulent times. From Trump’s comments about immigration, DACA and deportation to invocation to a crime family like The Sopranos and to Trump’s misogynistic comments about former Miss Universe Alicia Machado whom he called “Miss Piggy,” because she gained weight and “Miss Housekeeping” because of her Hispanic background.

Given his peculiar and odd look, Trump is a dream come true for visual artists, some of them even called him “an endless fascinating muse.” “Trump’s head looks like it is “sculpted out of some kind of pudding.”” Illustrator Barry Blitt says, “I didn’t know anyone could look like that. He’s like an instruction manual for how to caricature.”

I’m sure there will be more covers coming. Hopefully not many more.

All images © belong to the artists and The New Yorker 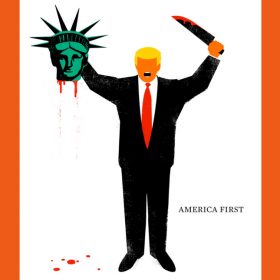 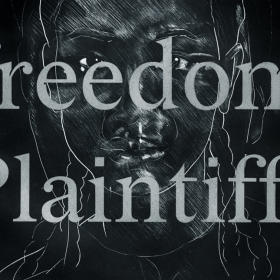 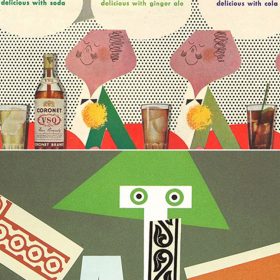 Paul Rand: Everything is Design Exhibition