Evie Hilliar (aka @yeevz_) is an Australian comic artist based in Sydney– making this week’s Interview the Gram the first one to feature a comic artist. I remember when her work first came across my explore page– I absolutely loved it. Hilliar’s comics are funny, relatable, frank, and personal among … 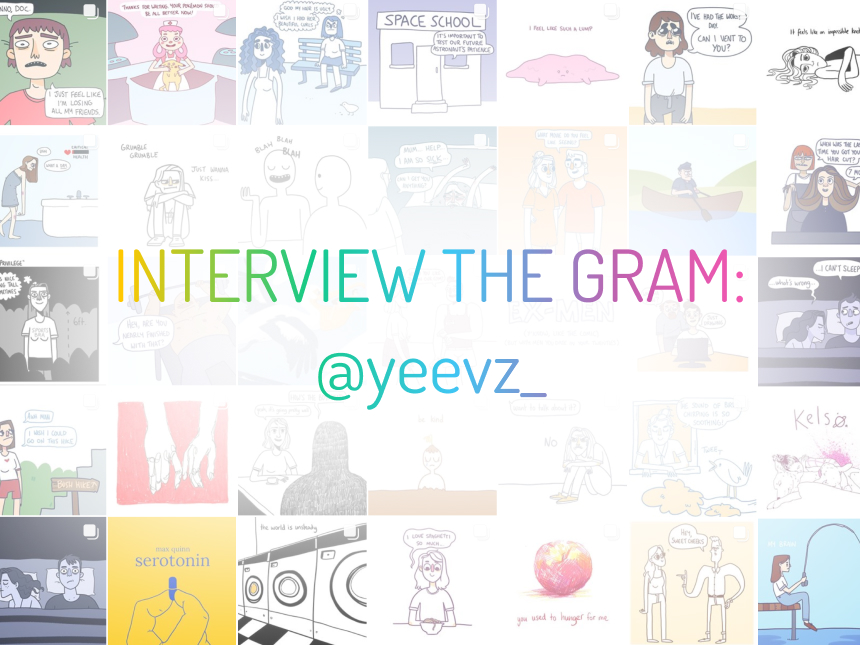 Evie Hilliar (aka @yeevz_) is an Australian comic artist based in Sydney– making this week’s Interview the Gram the first one to feature a comic artist. I remember when her work first came across my explore page– I absolutely loved it. Hilliar’s comics are funny, relatable, frank, and personal among many other things. The art style is delightful, and the comment sections are full of love. Comics is an outlet for Hilliar, and Instagram is simply where it gets shared with the world. I don’t really know how to explain it– her comics are her own celebration of life’s ups and downs.

?my parents never believe im sick. see also: holding a hand to my forehead and if it doesn’t leave a burn mark then i must be healthy ????? , , , , #comic #comics #comix #webcomic #comicstrip #sketchbook #illustragram #artistsoninstagram

Alfalfa Studio: Here’s the question I like to start everyone off with– Why do you do what you do?

Evie Hilliar: I first started drawing comics because it was a way to keep myself drawing every day without taking it too seriously. Since putting them on Instagram, it has created momentum, so I [now] am constantly practicing and looking at life and [my] daily routine differently, for content.

AS: Why do you think your comics found this momentum?

EH: In this age, if [your] content isn’t regular or fresh, your five minutes of fame [runs] out a bit faster. It’s sad, but it’s just how it works, and I’ve adapted to see the benefit of that, as that thought in the back of my mind forces me to keep creating in fear of becoming irrelevant. So, I draw consistently, which has uncovered other perks too– since I’m always making comics, it’s a really good way to vent out whatever’s been nagging at me, rather than holding it in and not processing it.

AS: Can you tell me more about the venting you do through comics? And what do you want people to take away from your comics, if anything?

EH: I guess I have a really visual way of processing emotion. If something’s bothering me it manifests as a visual metaphor in my brain. Dumping that into a comic virtually presses the flush button on the toilet that is my mind. It gets rid of the shit!

I think what I want people to take away from my comics is… a sense of comfort. Whatever you’re thinking, or feeling, someone else is sharing that same experience somewhere in the world. And we are all surviving through it. Just put whatever positive energy you can summon into those around you and lift each other up!

AS: I think you certainly achieve that, especially looking at the comments on your comics! If you don’t mind me asking, what’s a memorable example of a time comics really helped you cope with life?

EH: Any of my comics featuring the Void! He’s a character I use to rationalise toxic thoughts I have, and I essentially talk things through with him in those comics. [I’m] currently trying to convince myself that I’m not a crazy 23-year-old that still has an imaginary friend!

Yeah, the comments can be so so kind. Every time I think about them I honestly almost tear up.

AS: So when did you first start out with comics? And how’s your life changed since then?

EH: I took an elective at uni[versity] a couple of years ago on comics, which gave me a huge interest, but honestly [I] didn’t do anything with it until about a year and a half ago now. It’s been a blur. I scroll back to old comics now and I’m like, “Yeesh, I really haven’t changed at all, but I guess I can draw hands better now”. On the surface, it’s nothing life-changing. I still have a full-time job I work, still go to bed at 10 PM, still have dumb irrational thoughts, still am essentially me. But I feel (and excuse this complete wank) a sense of freedom– like I’m not tethered down to my head, I can escape for a bit from everything that’s bothering me. Other than that… as I said, I guess I can draw hands now.

AS: I get that. How many comics do you start that get thrown out and never make it to Instagram?

EH: Baaaarely any if I’m being honest. I made a pact with myself that if I make something, I post it, no matter how shit I think it is at the end of drawing it. Otherwise, the world wouldn’t know about amazing content like this:

everyone can go home because last night i drew the best comic of all time (pay close attention to the lapses in typography and stylistic discrepancies, as the artist descends into the abyss) , , , , , #comic #comix #comics #comicstrip #webcomic #comicartist #weed #drugmemes #funnycomic #artistsoninstagram #sketchbook #dailysketch #dailycomic

There are definitely comics that I start and don’t get around to finishing, but I still plan on finishing them, eventually, when I run out of ideas.

AS: What do you do outside of comics? Does it impact your comics at all?

EH: I actually work full time as a retoucher. That doesn’t impact my comics so much as just going and hanging out with friends or just going outside and making random observations. If I’m locked in my room all day then I’m just not gonna come up with any ideas! I have this huge list of my phone of things to draw after random thoughts I’ve had on a night out but honestly… most of them don’t make sense, even to me haha

AS: So how/what kind of ideas come to you? And would you like to share some of the things you’ve written down that don’t make sense to you anymore?

EH: Through conversations, mostly. Someone will say something funny and I’ll write it down. And then as an homage, I will generally draw them in the comic as credit. God, I just wish my friends were funnier, then maybe my comics would be better! 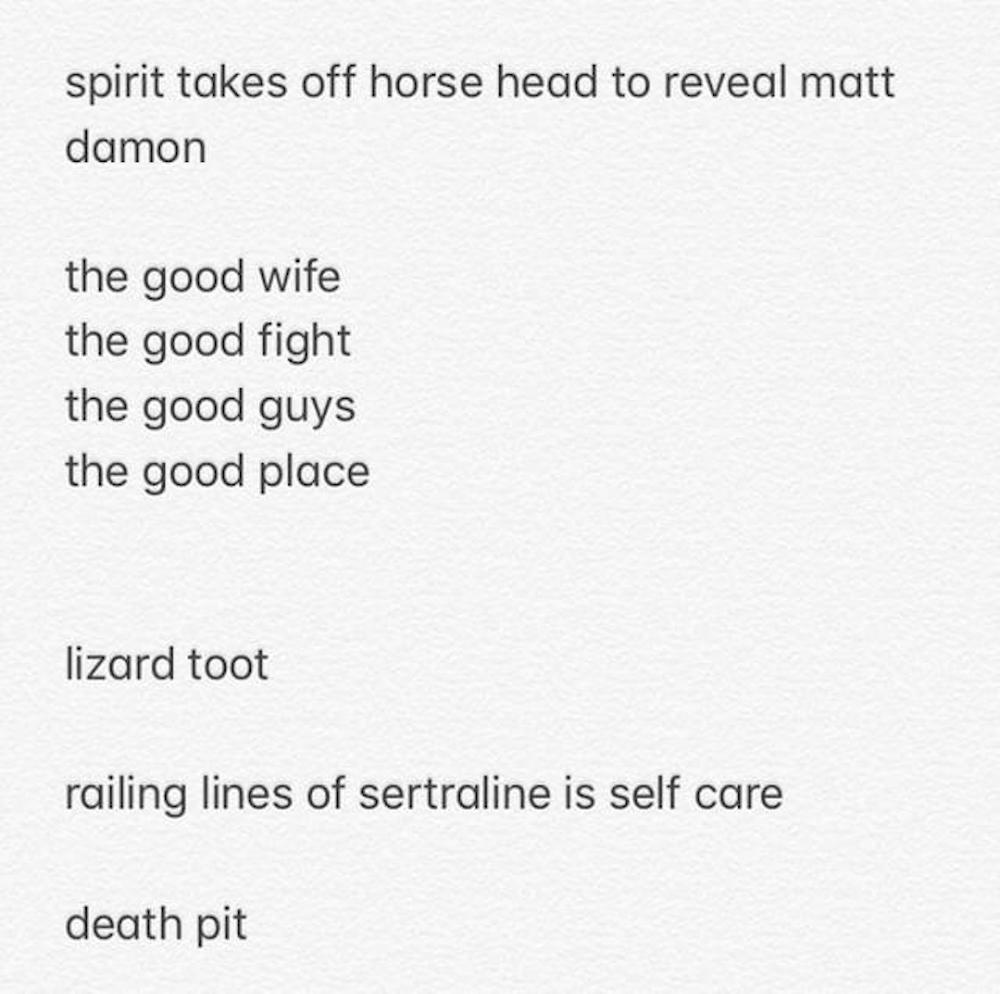 This is an excerpt from my list! What is a lizard toot!!! I have spent so long wondering.

AS: Ooh maybe you could do a comic strip of different ways to interpret what a lizard toot is!

EH: Totally!! I wanna do some comics trying to interpret what my old notes are but [I’m] unsure if enough people would actually find that as funny as me!

AS: Earlier you mentioned a fear of becoming irrelevant. Can you talk a little bit more about that and the other fears you have?

EH: Apart from my massive phobia of spiders? It would be people not taking me seriously as an artist because of my comics. I love drawing cartoons and funny things but I try and balance that with personal work, so I’m not locked down in just the one illustration style. I’ve had a lot of people that I know dismiss me because of my comics, and not being a “real” artist because I showcase my work on Instagram. The only way around that is to prove ‘em all wrong!

u ever see a dog u wanna pet so bad that you literally catch on fire (for me it’s every dog ever) , , , , #dogsofinstagram #puppiesofinstagram #wholesomememes #comic #comics #comicstrip #webcomic #comix #illustragram #artistsoninstagram

AS: What kind of personal work do you balance things with? And can you talk a little more about not being taken seriously in general?

EH: [As personal work I do] illustrations that have more detail and take more time. I usually finish a 7-panel comic in 1-2 hours, which is in most circumstances, all I have time for. It doesn’t leave room for finesse. I see comic artists like John Cullen who’s comics are amazing and detailed and hilarious– I just can’t do that in two hours! So sometimes on a weekend it’s nice to just go to the metaphorical gym for illustration– drawing from references, doing backgrounds, just stretching my art muscles without the pressure of anyone commenting on it.

Today’s art scene is bloody incredible. There is so much amazing young talent. But I know that artists with a more distinct style, that’s quirky and a bit obscure, definitely have more credibility AS artists than someone like me. I think there’s a stigma on cartoons, and it’s something that gets me down a bit, and more often lately makes me feel like I have no integrity as an artist. I’m still trying to reconcile this but I’m working on it! I gotta remember that art is a vessel for ideas, too, and if you have a sense of humour, or a story to tell, or a feeling to express, then that should be enough for your art to be valid.

I don’t take myself seriously most of the time in a personal sense. I think it’s easier to laugh something off or not take it seriously than to let it impact you sometimes. So I’m sure that comes off in my work! But there’s a difference between who I am as a person, and who I am trying to be as an artist, even though it’s a bit blurred at the moment.

AS: But you’re finding your way? Growing as a person? Slowly getting there I hope?

EH: I hope so too???? Maybe a year from now I’ll look back at comics I do today and be like “wow, look how much I have improved and changed!” just like how I do today, with comics I made a year ago.

kindness ? had a bad week but some people really pulled through and were so so nice and kind and i feel so so full because of it. thank u guys ?? also new icon cuz yellow lol ? , , , , #comic #comics #comix #webcomic #womenwhodraw #wholesome #wholesomememes #sunflower #dailysketch #sketchbook #illustragram #artistsoninstagram

Thank you so much Evie for reflecting on and chatting about your comics! Never stop the amazing work you do! 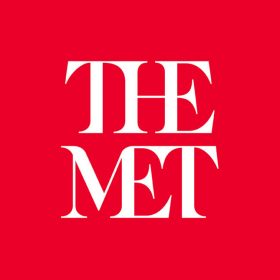 The MET: The Aftermath 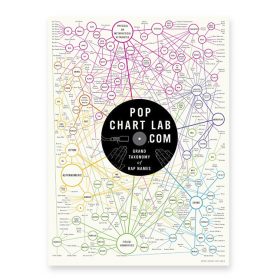 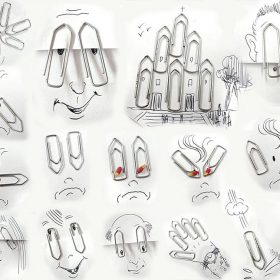