The Designers Behind Apple Emoji

Apple Original Emoji Set   In the age of texting, Emojis have become a part of our day-to-day lives and have completely changed the way we communicate. They may seem like simple icons but they evoke a spectrum of feelings and emotions, adding life to an ordinary text message. Emojis …

In the age of texting, Emojis have become a part of our day-to-day lives and have completely changed the way we communicate. They may seem like simple icons but they evoke a spectrum of feelings and emotions, adding life to an ordinary text message. Emojis have become so popular that there’s merchandise, movies and even a day dedicated to these small icons. Ever since Emoji became wildly popular, Google’s Android, Apple’s iOS, Microsoft’s Windows, Facebook, and Twitter, have all reinterpreted the original alphabet adding their own aesthetic touch, however, Apple’s emojis are the most widely used and recognized. Designer Angela Guzman, created these icons for Apple with the help of her mentor Raymond when she was only an intern!

Angela was a year away from receiving her MFA in Graphic Design from the Rhode Island School of Design (RISD) and had landed an internship with Apple during the summer. She was anxious as she didn’t know what team or projects she would be assigned but little did she know she would change the way the world communicated.

For three months Raymond and Angela shared an office and illustrated a plethora of faces, places, flags, animals, food, clothing, symbols, holidays, sports, etc. Before getting right had to first learn how to design simple icons that would fit in with the Apple-Style. Raymond and Angela paid special attention to the details: the direction of the woodgrain, how freckles appeared on apples and eggplants, how leaf veins ran on a hibiscus flower and how leather was stitched on a football. Initially, it took her a day on each emoji but as time went by she managed to do three or four per day.

Through the course of the three months, Angela and Raymond formed an unbreakable bond. They shared stories and laughed together while working. It was this friendship through design that made the Apple emoji so successful. 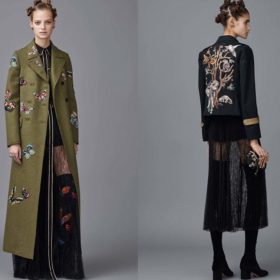 Be Mine, Valentino (dresses)! 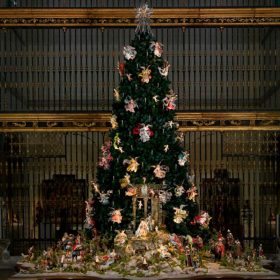 Museums Decorate for the Holidays 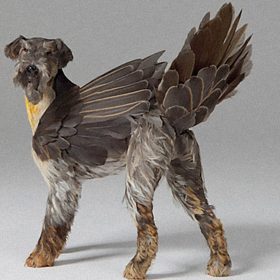