Tony DiSpigna at Pratt Institute where he currently teaches There is no doubt that Tony DiSpigna is a living legend of typography. His work and style have influenced generations of designers with his timeless typographic compositions, particularly his exquisite Spencerian work. DiSpigna, who still keeps his practice very much active …

There is no doubt that Tony DiSpigna is a living legend of typography. His work and style have influenced generations of designers with his timeless typographic compositions, particularly his exquisite Spencerian work. DiSpigna, who still keeps his practice very much active — most recently he designed a lettering to celebrate the marriage of Meghan Markle and Prince Harry — is the subject of the acclaimed documentary Imported from Brooklyn. The film recently won the 2020 Emmy® Award for Best Education Special Documentary film.

The film chronicles Tony’s 50 years as a graphic designer. As you surely know, 50 years of undying passion and complete dedication to a craft is not an easy achievement yet Tony has done it (and keeps doing it) with love and imagination. Perhaps you are not familiar with the name Tony DiSpigna but for sure you have seen his work. As a partner in the legendary studio of Lubalin Associates, he worked on all aspects of graphic design and was responsible for bringing to life some of the most recognizable logos in the world.

Tony was born on the island of Ischia, Italy and emigrated to the Borough of Brooklyn at a very young age. In high school he worked behind a cold cuts counter. Bored to death at this mundane job, the young Tony often wondered if there was a place for him in the design and art world – none of his family was an artist or designer. It was the early 60s and the young Tony couldn’t afford to go to Pratt, so he enrolled at what was then New York City Community College, currently known as New York City College of Technology or City Tech. And so his career in graphic design began. Little did he know that he would revive and revolutionize the Spencerian Script style. Spencerian was the de facto standard writing style for business correspondence before the adoption of the typewriter from approximately 1850 to 1925. There are many designers today trying their hands at Spencerian, all you have to do is scroll through typography and design topics on Instagram, yet no one has the command that Tony DiSpigna has. Tony is the master and Imported from Brooklyn shows it.

I have the fortune of getting to know Tony when he designed a couple of t-shirts for me (all sold out now!). I’m happy to report that he is one of the nicest people I’ve worked with.

If you are interested in seeing a genius at work and learning about his incredible journey, I highly recommend watching this inspiring documentary. Imported from Brooklyn was directed by Josh A. Kapusinski, produced by Douglas Davis and is free on YouTube or below. 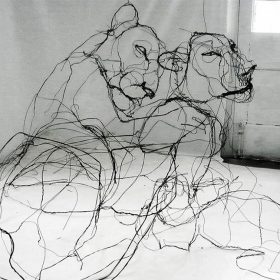 The Scribbled Sculptures of David Oliveira

All You Need is Love, and… 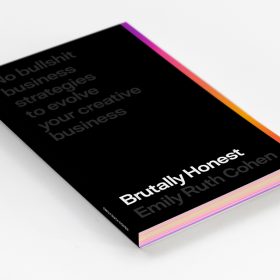