Skip to content
BACK TO BLOG
Category: Arts & Culture Expertise: All, Publication Design

Project brief
Alfalfa Studio was commissioned to design the art book, “A part Together.” The book was published in conjunction with a solo exhibition by American artist Carol Hepper at Galeria Ramis Barquet in New York City.

Hepper’s work is mostly known for her wide range and use of specific materials. In her pieces, Hepper systematically and spontaneously places weight on the ‘object’- its cultural implications, spatial boundaries and possibilities, as well as her respect for its power.

“A part Together” needed to visually translate the systematic and spontaneous nature of the artist’s work to the printed page.

Approach
The 54-page book is designed to highlight Hepper’s dimensional sculptures, which explores the body, spirit, nature, and culture. The book focuses on displaying her expansive and interesting use of unconventional materials with a clean layout and a white background. The detail shots let the audience appreciate the power of the objects.

Outcome
A handsome book whose arresting cover features, in bright green, an illustration that wraps on back as well as in its French flaps. The interior begins with a poem “As in over” by Michael Coffey, then showcases Hepper’s work.

Through meticulous typesetting and a flexible grid, the visually balanced composition best presents Hepper’s individual sculptures. Each spread follows the unpredictable shape of the pieces and emphasizes the powerful forms. The quiet layout allows Hepper’s work to shine. 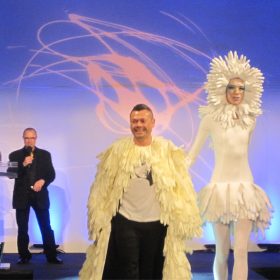 Rocking the Runway With Our Lady Gaga Meets Björk Creation 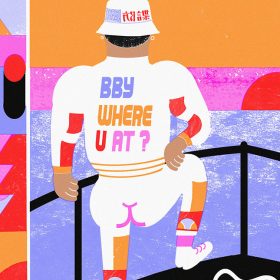