A collectible poster of Central London composed of more than 400 icons, from poets and princesses to pubs and parks and all the celebrated places in between.

In London, Rafael Esquer’s imagination is sparked by the mashup of the medieval and the modern. “Walking through Central London is like stumbling through time,” he says. “In one block you’re in the age of Chaucer, turn the corner and you’re in the Enlightenment, and past the next pub you’re in the middle of whatever comes after Postmodernism.”

That delightful jumble is what inspired him to add London to his Iconic Cities© poster series. A stroll through Central London already has the feel of a collage that’s chock-full of surprise encounters.

In Esquer’s poster, colorful hand-drawn icons of the City’s landmarks and luminaries are packed into a vibrant collage forming an imaginative map of Central London itself.

The wonderful web of detail invites viewers to enter and explore all corners of town, from Notting Hill to Stave Hill and Bloomsbury to Battersea.

The Iconic London Poster© comes in standard one-sheet movie-poster size (27” x 40”) and is for sale only in the Alfalfa Studio Shop.

More than 2 years in the making, the Iconic London Poster© was carefully researched and composed of more than 400 icons. They represent everything from the bridges to the Beatles, Shakespeare to the Shard, Parliament to Mary Poppins, Waterloo Station to Amy Winehouse, Guildhall to the Gherkin, Harrods to Hitchcock, and Buckingham Palace to Banksy. London’s famous critters are included, too. Look for the Holland Park peacocks, the Canary Wharf seals, and the red foxes that trot through every neighborhood. Around the perimeter of the poster, in grey silhouette, Esquer has added a legend that identifies 150 major buildings and landmarks by name.

The Iconic London Poster© is printed in a limited edition on premium Italian heavy cardstock with high whiteness for brilliant colors, strong contrast, and fine details. It follows the success of Esquer’s Iconic New York Poster© in 2014 and the deluxe after-dark edition, Iconic New York Illuminated©, in 2016.
All of the posters in the Iconic Cities© series are for sale only in the Alfalfa Studio Shop.
Next in the series, currently on the drawing board at Alfalfa Studio, are Iconic Tokyo© and Iconic Paris©. 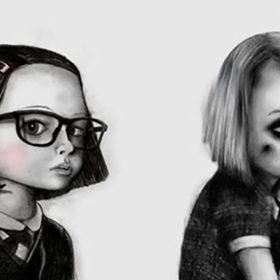 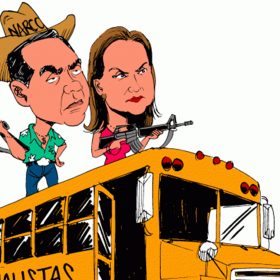 A year of The Ayotzinapa Resistance Art 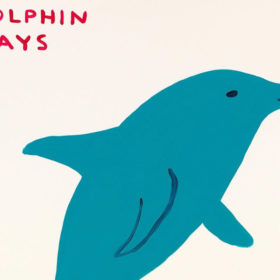